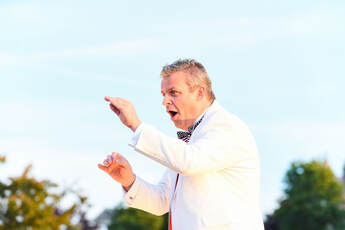 Richard Nickerson was recently named Artistic Director for the Maine Music Society. He has been Director of Choral Activities at Windham High School in Windham, Maine for the past 34 years where he conducts 2 choirs and teaches courses in music theory, guitar and music industry. Among the choirs that he currently conducts is the internationally acclaimed Windham Chamber Singers.  He also served from 2009-2020  as Minister of Music at the North Windham Union Church.

A frequent guest conductor and clinician, he has made guest appearances in 18 states, 4 Canadian provinces and 8 European countries.  He served for 8 seasons (2007-2014), as the conductor of the “Magic of Christmas” Chorus with the Portland Symphony Orchestra.  He also spent 8 years (2001-2009), as the Artistic Director of the Boy Singers of Maine.  His choirs have performed for many dignitaries, including 3 US Presidents.  He made his Carnegie Hall debut in 1998 and returned in 2016 to conduct the Maine Festival Chorus.

Dr. Nickerson has received numerous awards including Maine Music Educator of the Year, Maine Distinguished Choral Director of the Year and runner up for Maine Teacher of the Year. In January 2009, he was recognized by Choral Director Magazine as a “Choral Director of Note”. In December, 2016, he was named as a Top-10 finalist for the Music Educator Grammy Award.  He has held many professional offices including 2 terms as President of the Maine chapter of the American Choral Directors Association.  In 1997, a group of parents began a scholarship in his name, which is awarded each year to a Windham High School graduate planning to make choral music a part of their college experience.

Nickerson received a Bachelor's Degree in Vocal Music Education, the Master of Music in Choral Conducting from the University of Maine and the Doctor of Musical Arts degree in Choral Conducting from the Conservatory of Music - University of Missouri - Kansas City.  He has studied conducting with Dr. Eph Ehly, Dr. Charles Robinson, Dr. Dennis Cox, Werner Torkanowsky, Robert Shaw, Eric Ericson and Rodney Eichenberger.

He lives in Windham, Maine with his wife, Linda. They have four grown children and twin cats.